The citizens or the government? Whom shall we be afraid of? A case for Dr Besigye 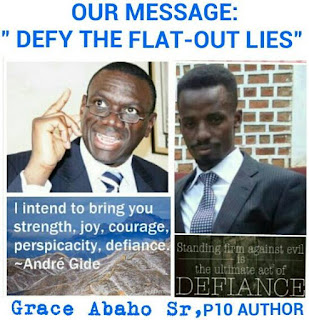 Every time I see Besigye smiling, I smile
Every time I hear he is well, I pray for better days
Every time he is tortured, I stand out to his plight
Every time he is jailed, I see the hypocrisy of the jailer
Every time he has a court appearance, I wait for the next lie they have against him
Every day that passes, I don't get it:
Why is a man the Museveni government claims lost the election; so popular than the one they foist on us?

When will justice be served?
Shall the president of the people continue to be harrased?
All these questions I don't have immediate as answers,
But I know: it takes us, the people.
Don't demonize us.
Don't torture us.

Don't take our Patience for stupidity.
Don't think its okay to suffer at your expensive.
The Museveni government,do you copy?
-Grace Abaho Sr. ™   ©For Dr.Besigye

Now about Museveni’s slew of lies,they can go on and on if I were to begin. I will singularly deal with one lie he told in the 80’s: ‘the problem of Africa is leaders who hinge to power”—(PS: remember, you can never get a second chance at making a first impression).This, about leaders that Museveni said is both true and false—it is true that actually they are a problem and a lie because he told it to take advantage of the people. Sadly the lie saw him to power, that’s how he won the war with just 27 men. And today, Museveni calls these people rats, mad men and all the other names you can imagine that are horrible.

I can’t be party to that sort of moral silence that shortchanges both our rights and our future:it has to be common sense logic against Museveni’s trickery and concealment. The rule of the law is not rhetoric; it is the very fibre that binds a society together. Government’s core mission should be to protect the right to life and liberty of all the people but the current administration has decided to willfully allow some to blatantly ignore the laws to suit their political agenda making itself derelict in its duty to protect its citizens. Are you going to keep watching and let this happen? If you do, that’s your fault, we need to know defiance is an option for those who have been abused again and again—it has to be us against them. When the water starts boiling, it is foolish to turn off the heat. Advocacy beyond this line can feel like pale tea to those who have lived their whole lives below it but that’s all you have, your call

As I wrote earlier, if you and I shake the honest nest, Museveni is a very toxic leader, the direct opposite of Dr. Besigye: “A leader is a person who has an unusual degree of power to create conditions under which other people must live and move and theirbeing, conditions that can neither be eliminating or shadowy as hell. A leader must take special responsibility for what’s going on inside his or her own self, lest the act of leadership create more harm than good. Political leaders, parents, clergy have potential to cast as much shadow as they do light. Refusing to face the dark side of leadership makes them abuse more likely. All too often leaders ‘do not even know they’re making a choice, let alone how to reflect on the choice of choosing’


Claremont graduate professor Jean Lipman_Bluman uses the term toxic leaders to describe those who engage in destructive behaviors and those who engage in dysfunctional charateristics .At the same time; derailed leaders act vs. the interests of the subordinates and the organization; they bully, manipulate, deceive and harass followers; they may be stealing from the organization, engaging in fraudulent activities and doing less than expected. Constructive leaders, on the other hand, care about subordinates and help the organization achieve its goals while using its resources.Havard professor Barbara Kellerman believes that limiting leadership solely to good leadership ignores the reality that a great too many leaders engage in destructive behaviors. Overlooking that fact, Kellerman says, undermines our attempts to promote good leadership not by ignoring bad leadership, nor by presuming that it is immutable, but rather by attacking it as we would a disease that’s always pernicious and sometimes deadly”
The former President of the United States Thomas Jefferson once said, ‘the government should fear its citizens’ .Our government, on the contrary, laughs at us. It raises enormous hand and says, ‘go to hell’. It isn’t even trying to pretend anymore—what I would hope, what I would call for is a peaceful yet drastic change in how we function as citizens. We should be utterly unforgiving of corruption and entrenched injustice and we should make government officials guilty of such indiscretions pay dearly for it. The renowned Ai Wei Wei eloquently warns us that, “If you don’t act; the danger becomes stronger”., this has been proven a thousand times every day of our lives: things are not getting any better, it’s crazy when people instead cheer on steady regress as steady progress, a very scary situation to be bystanders to.